50 Years of the NeoCatechumenal Way

Members of the NeoCatechumenal Way at St Clare's travelled to Rome earlier this month to celebrate the 50th Anniversary of the Way.

Each year the members of the Neocatechumenal Way from across the world come together at Porto San Giorgio, Italy. 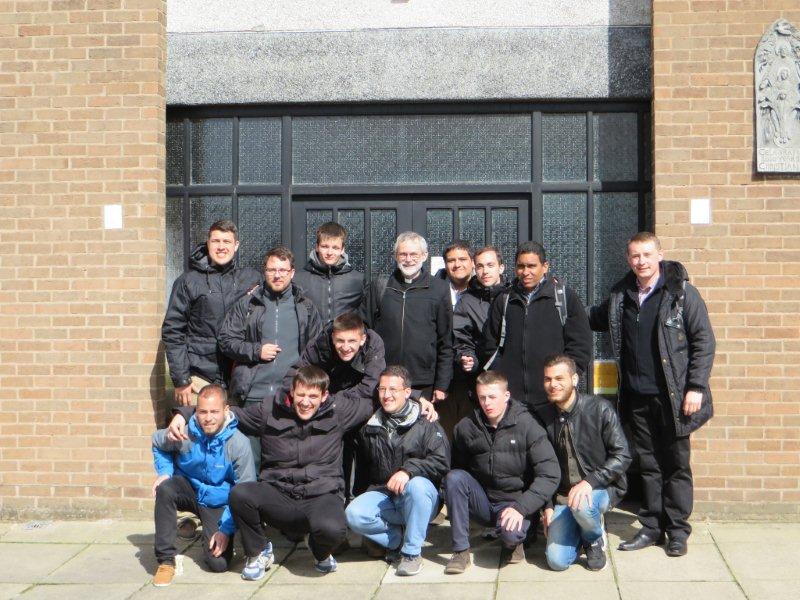 Well, a dozen to be exact! The young men pictured called in to St Clare's on their way back down to their seminary in London.

An audience with Pope Francis 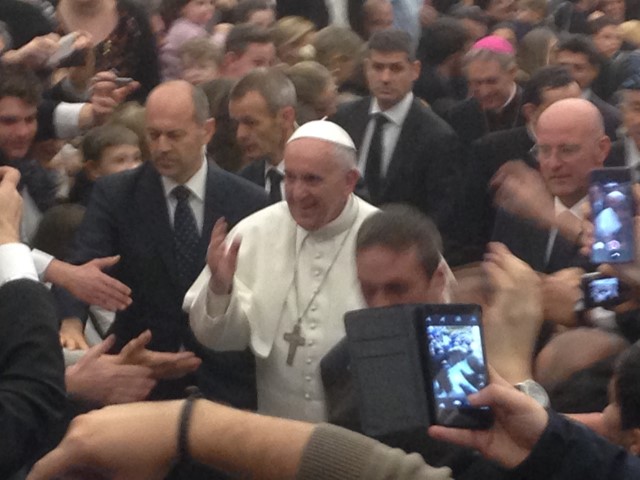 On Thursday afternoon I travelled to Rome along with the two families in mission in our parish from the Neocatechumenal way the Keatings and the Martins.

THIS IS THE WAY - BE FOLLOWERS 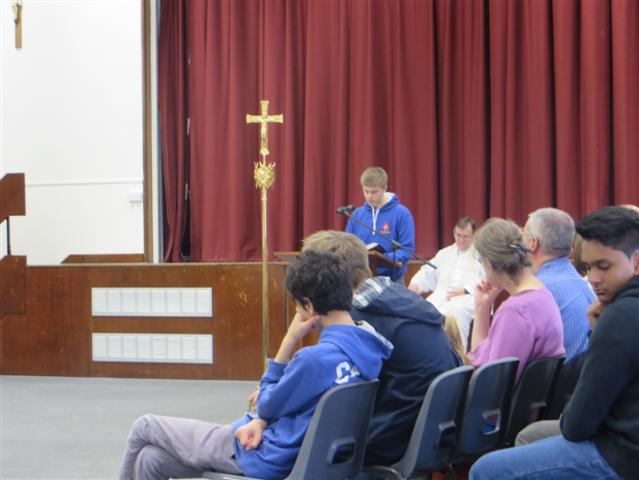 This weekend (Friday, Saturday & Sunday) the members of the Neo Catechumenal Way met from various parts of the country in Preston. Friday afternoon many of them members, young & old, gave public witness in the centre of Preston: singing, dancing and giving testimony. It was invigorating and, as one passer-by said, ‘This is not usually what Catholics do.’ In the evening many of them adjourned to St Clare’s to celebrate the Eucharist. 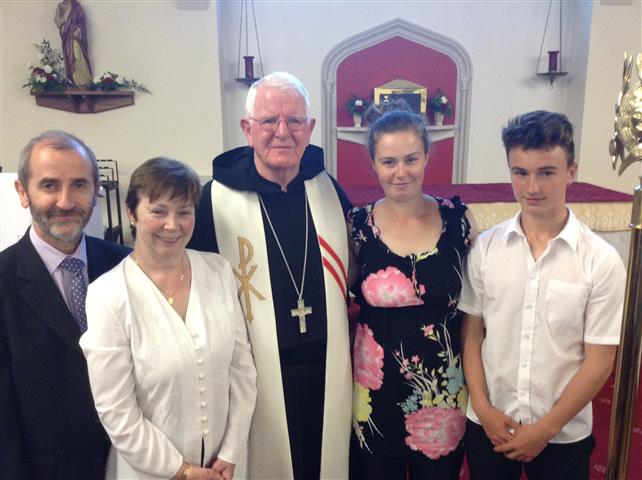 For the last eight weeks the Neocatechumenal Way has been presenting an Adult Catechesis in the parish.

The street mission returned to Preston City centre again on Sunday afternoon between 1pm and 3pm.

The Street Mission continued this Sunday to promote the Adult Catechesis here at St. Clare’s. 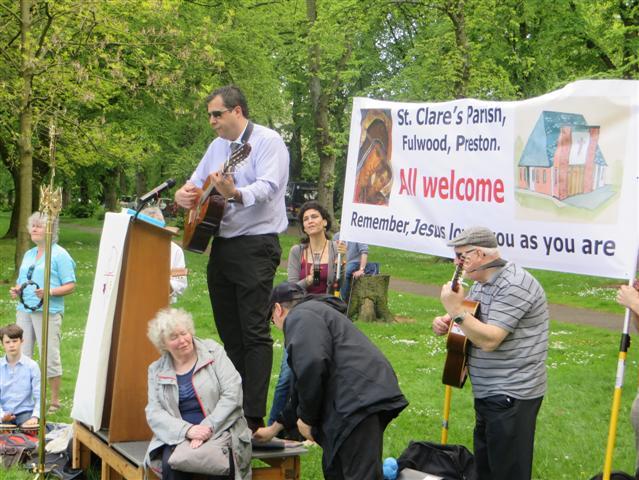 The Street Mission continued this Sunday to promote the Adult Catechesis here at St. Clare’s. This week was not so much a Street Mission as a Park Mission.

The adult catechesis began here at St. Clare’s last Monday and Thursday; around 35 attended each evening.

The parish has again invited The Neocatechumenal Way to deliver a catechesis starting on the 20th April for around seven weeks every Monday and Thursday, why not come along and listen?

Maybe you are unsure about The Neocatechumenal Way, you may have questions to be answered; to help answer any questions we have made available a couple of authoritative statements, one from the Pope and one from the Official Website.

In the primitive church, when the world was pagan, those that wanted to become Christian had to begin a "catechumenate," an itinerary of formation in preparation for Baptism. Today the process of secularization had brought many people to abandon the faith and the Church: because of this there is a necessity for an itinerary of Christian formation.

The Neocatechumenal Way is not a movement or an association, but an instrument in the parishes at the service of the bishop to return to faith many of those who abandoned it.

The Way began in the early 60's in one of the slums of Madrid, by Kiko Argúello and Carmen Hernandez, and was endorsed by the then Archbishop of Madrid, Casimiro Morcillo, who noted in that first community a true rediscovery of the Word of God and the implementation of the liturgical renewal proposed in that time by the Council.

Having seen the positive experience in the church of Madrid, in 1974 the Congregation for Divine Worship chose the name Neocatechumenal Way for this experience.

It is a way of conversion through which the richness of the gospel can be rediscovered.

In these years the Way has diffused itself to over 900 Dioceses, in 105 Nations, with over 20 thousand communities in six thousand parishes.

In 1987 the first international missionary seminary "Redemptoris Mater" was opened in Rome. The seminary hosts youth that have discovered and matured their vocation in a Neocatechumenal Community and have answered the call to go and announce the Good News in the whole world. Many Bishops have successively followed the experience of Rome and today in the world there are over 70 diocesan missionary seminaries "Redemptoris Mater," where over two thousand seminarians are being formed.

Recently as an answer to the Pope's call for a New Evangelisation, many families that have lived this experience have offered themselves to help the mission of the church going to the most secularized and dechristianised places in the world, preparing for the birth of new missionary parishes.

Rededication of England to Our Lady - service sheet

Sung Vespers Annunciation of the Lord 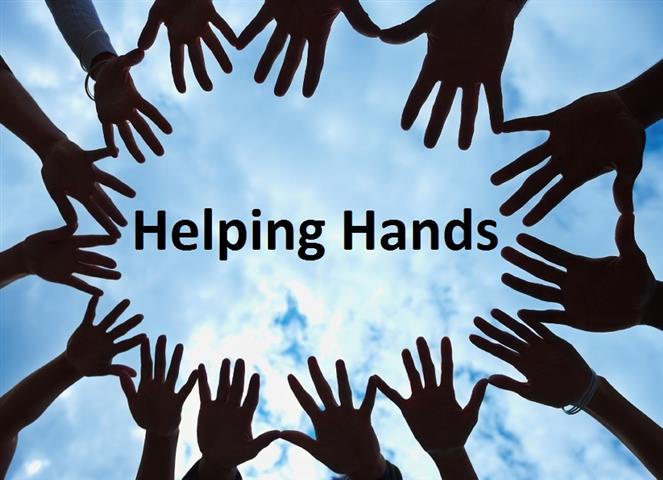