HomeNewsIn the City of St Clare 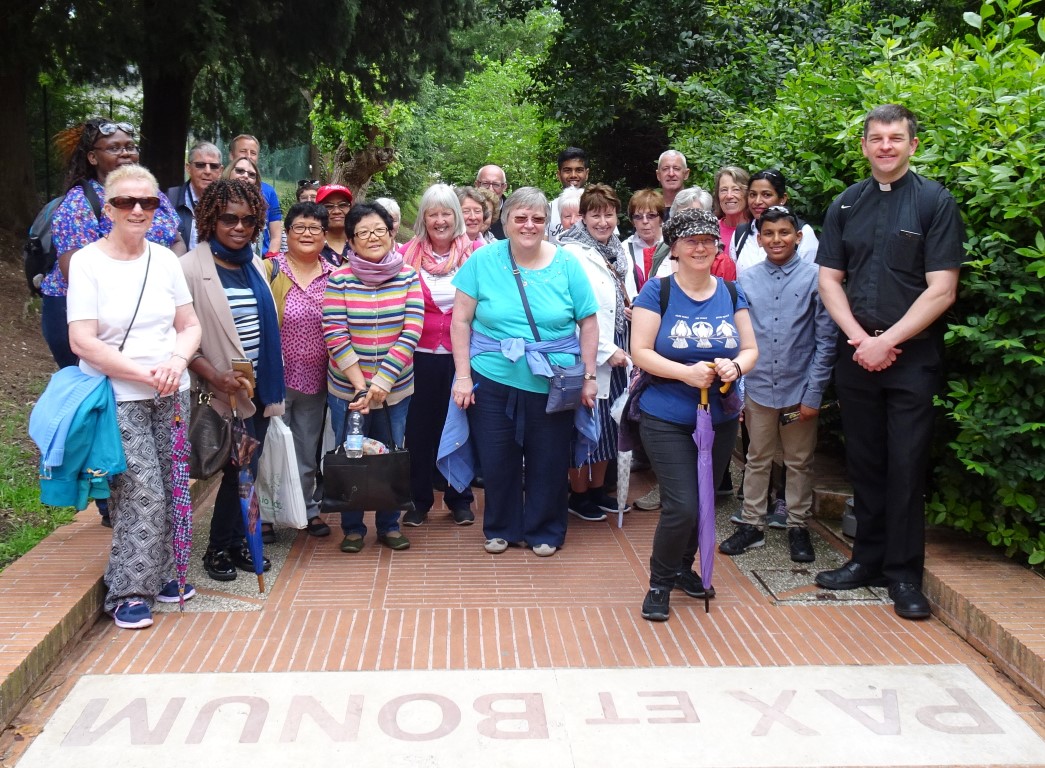 Parishioners from St Clare's spent a week in Assisi, the city which was home to our patroness, St Clare, and her friend St Francis.

During the week we were blessed to be accompanied by other pilgrims from local parishes, and a group of ten pilgrims from the parish of St Joseph and St Etheldreda in Rugeley, accompanied by their Parish Priest, Fr Peter Stonier. For those of us from St Clare's, the week was a wonderful opportunity to come closer to our patron saint, and we carried with us the prayers and intentions of many pilgrims back home. 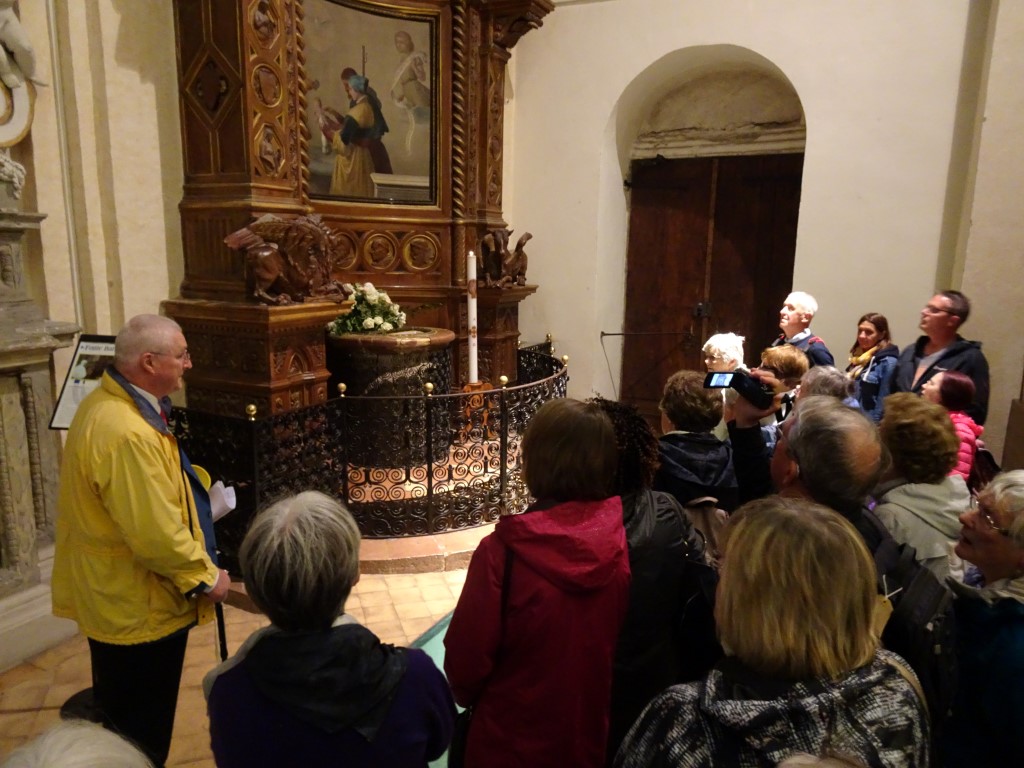 After arrival on Monday we visted the Cathedral, a stone's throw from our hotel, where Anthony Coles (our guide for the week) showed us the font in which St Francis and St Clare had both been baptised. Afterwards we celebrated Mass at the convent of the Franciscan Sisters of the Atonement. 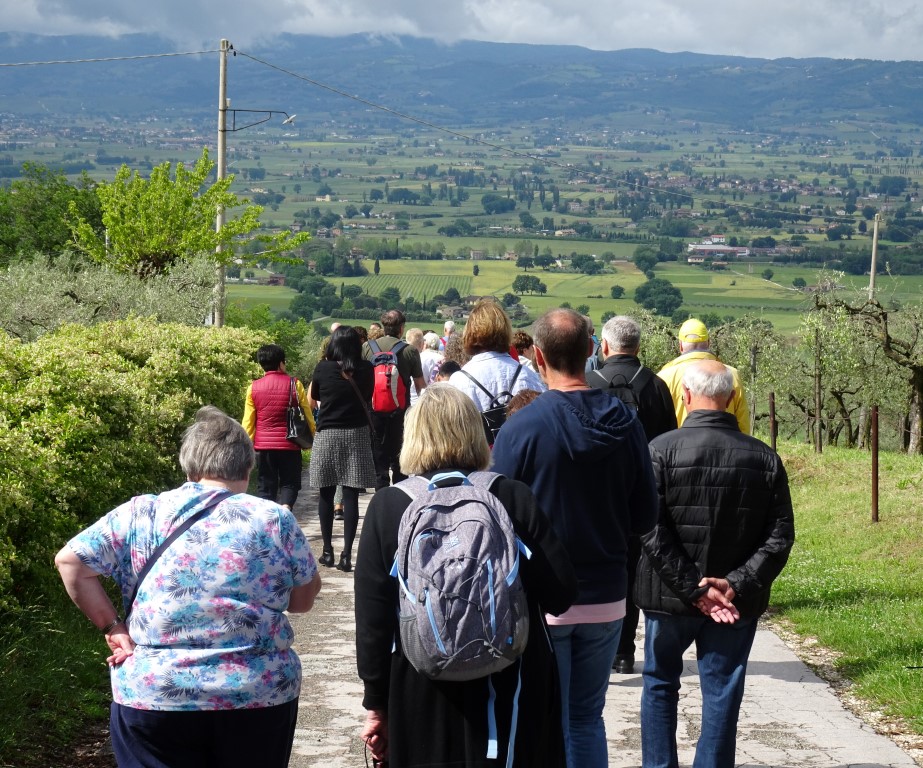 Tuesday began with a brief visit to St Clare's Basilica, followed by a walk down the hillside to San Damiano, where Clare lived almost all her adult life. We celebrated Mass there and had a tour of the monastery, visiting the places our saint lived, worked and prayed. 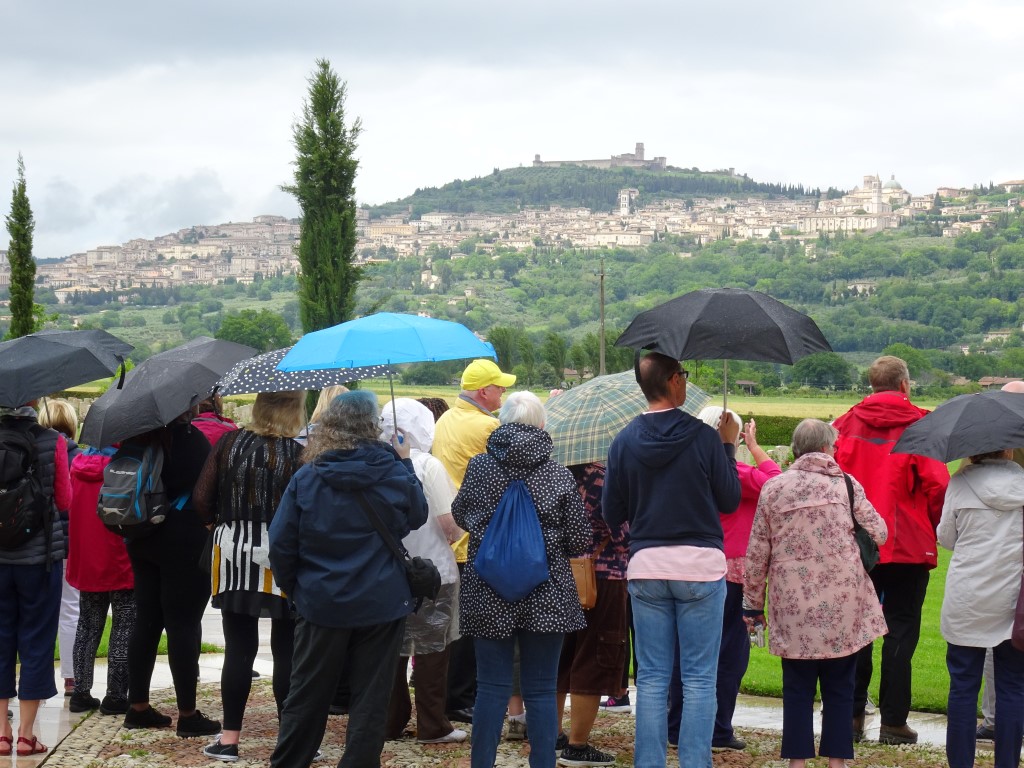 In the afternoon we visited Rivotorto, where St Francis and his brothers first lived, and also said some prayers in the Commonwealth War Cemetry there. The site boasts some excellent views of Assisi on the hill above. 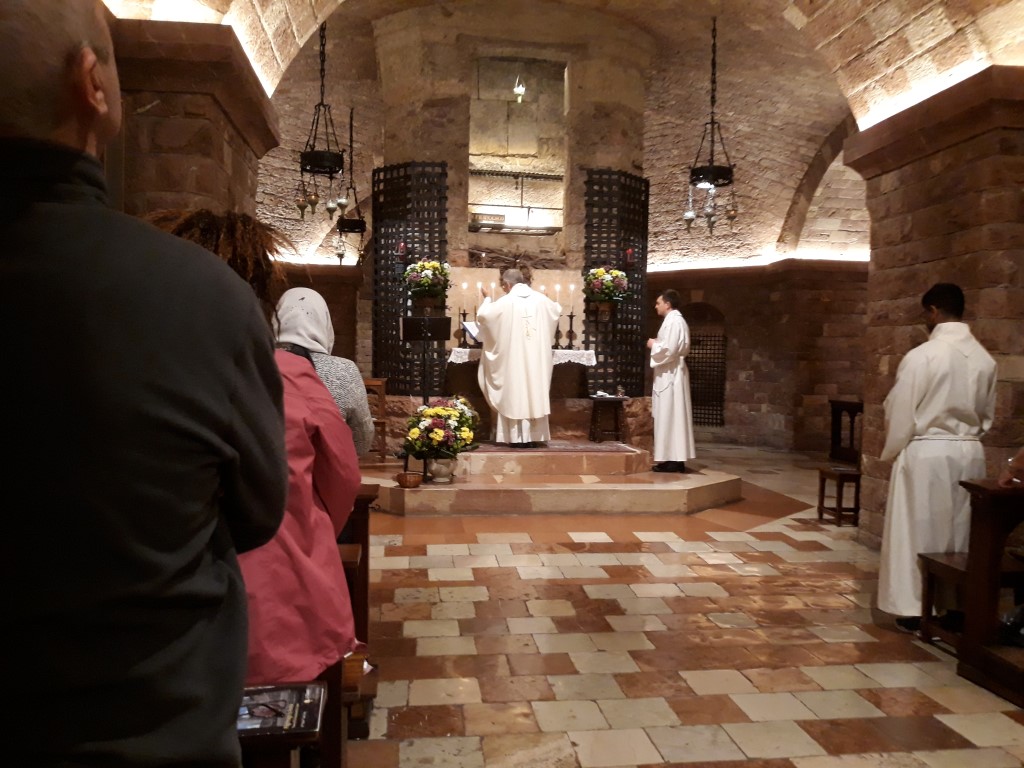 On Wednesday we had the enormous privilege of celebrating Mass at the altar where St Francis' body lies. His relics were placed there in 1230, just four years after his death. We then took a tour of the Basilica above, which is stunningly impressive and decorated with beautiful frescoes. 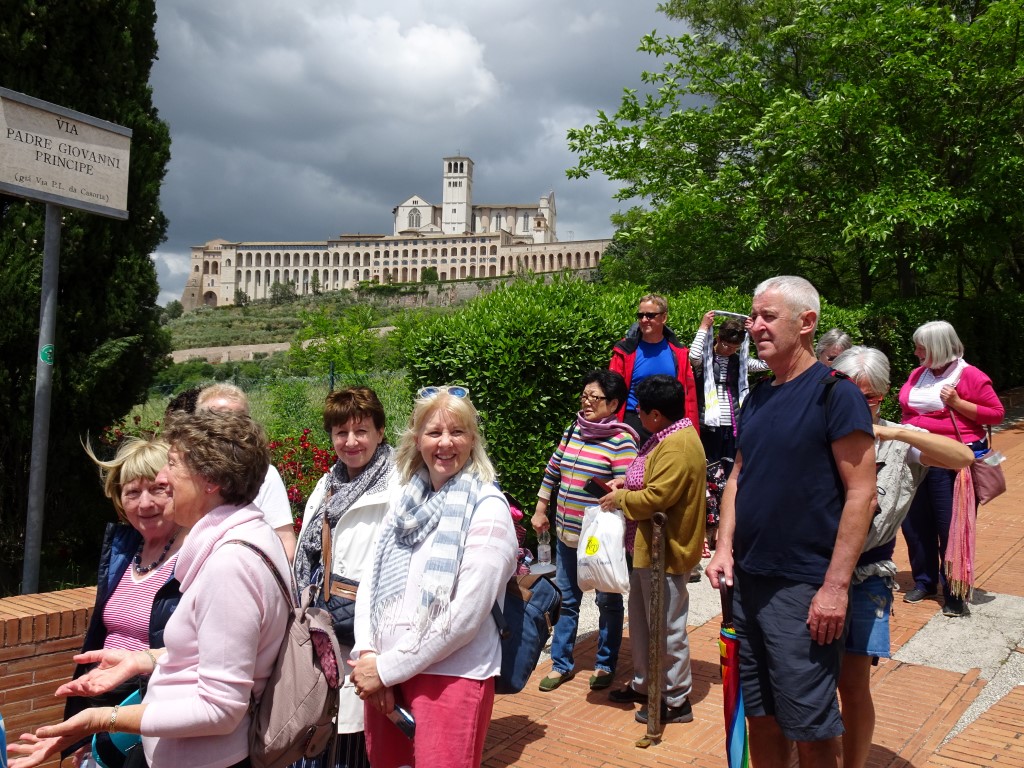 In the afternoon, a group of pilgrims walked from Assisi to the church of St Mary of the Angels (the Portiuncula), retracing the journey of St Clare on the night she left her family home and entered religious life. The church is tiny, but enclosed in an enormous basilica. It's especially moving to spend time there in prayer, recalling the importance of that tiny church for St Francis, St Clare and the whole Franciscan family. 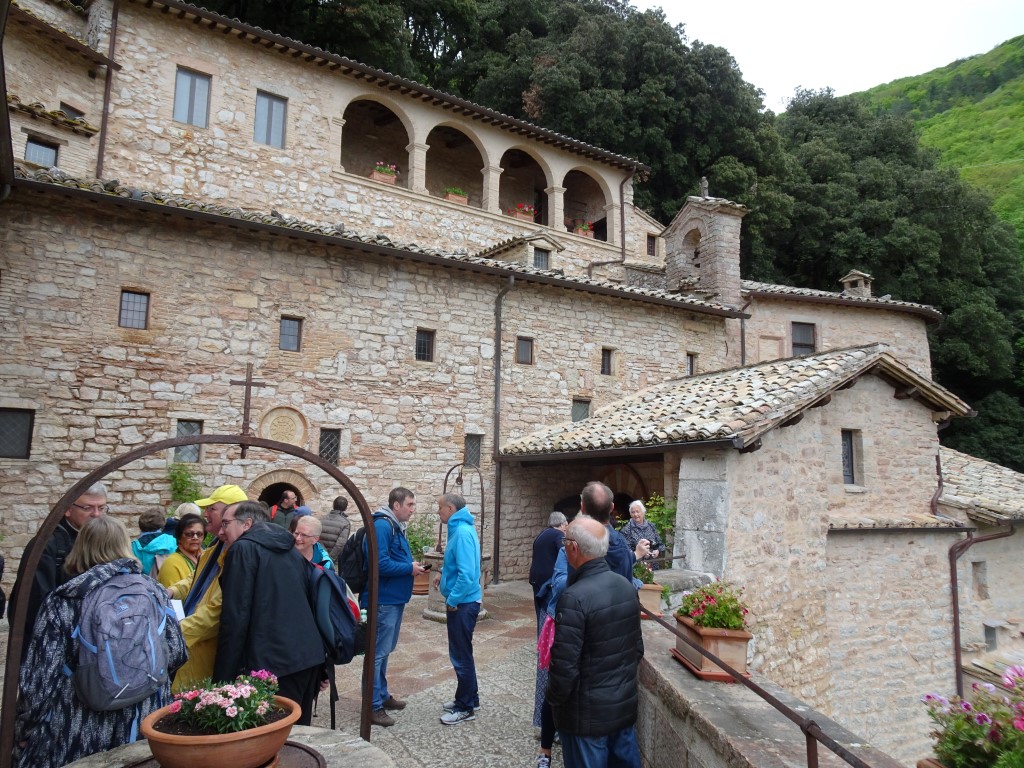 On Thursday - Ascension Day - we went up Mount Subasio to the Carceri hermitage, built on the site where Francis and his brothers would often retreat for periods of prayer. Like the Lord, we ascended above the clouds (literally - there was some low-lying cloud beneath us!), and celebrated Mass for the Ascension there, high above Assisi. The return journey, which many pilgrims made on foot, boasted spectacular views of the city and countryside below. 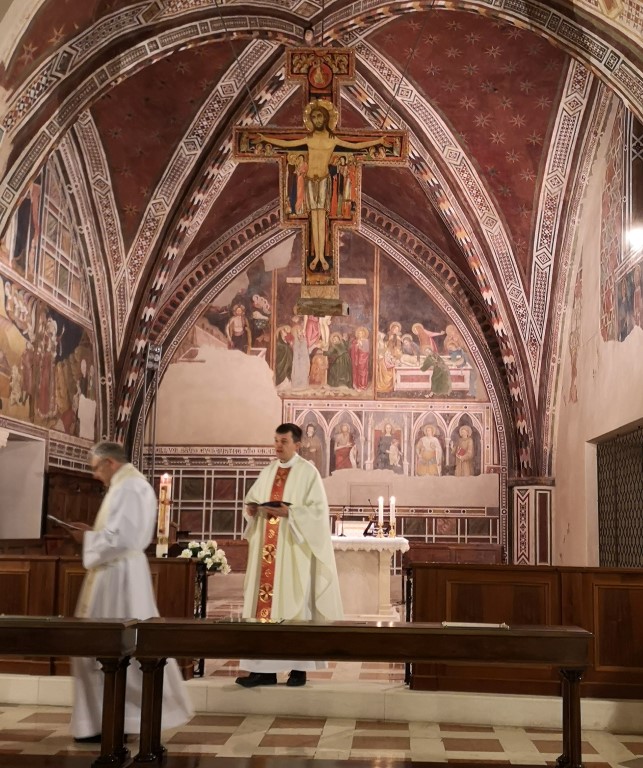 One of the great highlights of the week came on our final morning, when we celebrated Mass in St Clare's Basilica, under the original San Damiano cross. It was whilst praying in front of this very cross in 1205 that St Francis heard the Lord say to him, "Francis, rebuild my Church". A copy of this cross hangs above our altar in St Clare's, so it looks very familiar to parishioners! 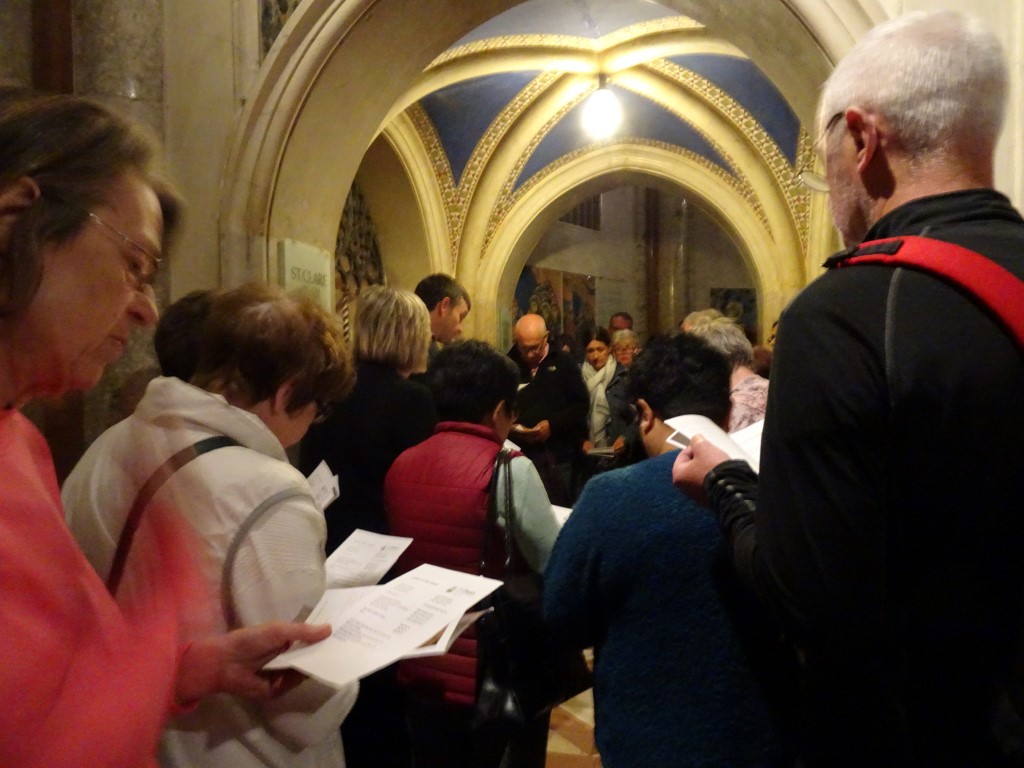 Finally, we went to the crypt below, where St Clare is buried. There, close to her relics, we prayed a litany of St Clare and our parish prayer, rededicating our parish to her care and intercession. It was a beautiful way to end a very enjoyable and memorable week. 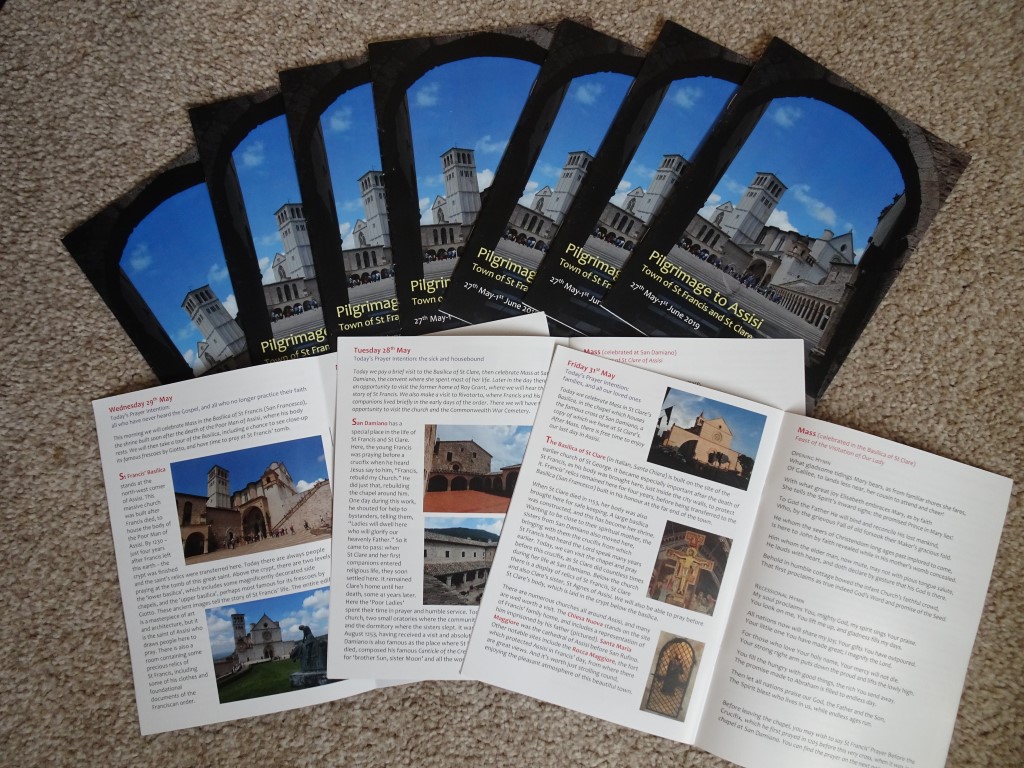 Throughout the week we remembered in our prayers the parish back home, and all the intentions people had asked us to pray for. The written petitions we took with us were carried to the tombs of St Francis and St Clare. Back home, many parishioners accompanied us in spirit and in prayer, using copies of the pilgrimage booklet which were made available to anyone who wanted them. 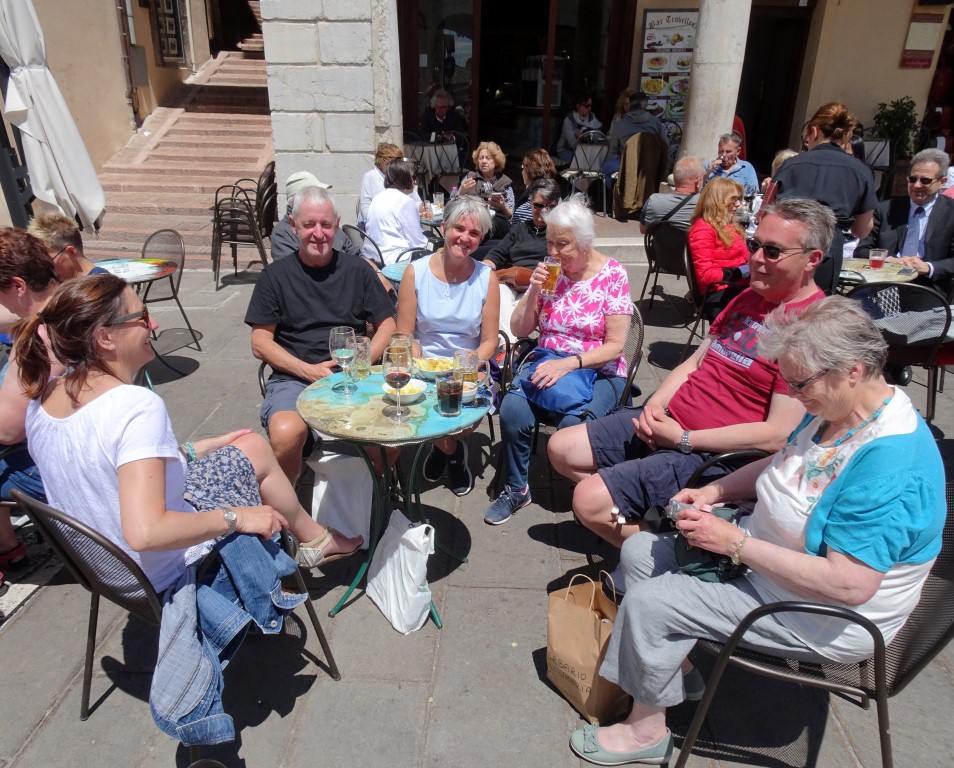 As well as the times of prayer and the sightseeing, we also had time for a relaxing drink and some delicious food, whilst enjoying the good company of our fellow pilgrims. Take a look at the gallery below to see more images of our week in Assisi, and some stunning views of this beautiful and holy town.